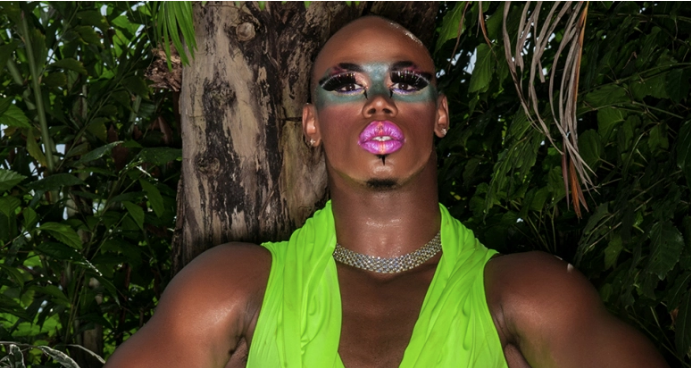 Courtesy of the Portland Institute of Contemporary Art

Isaiah Esquire was once a shy and awkward teenager. However, the 6-foot teen soon found his calling in dancing. This would lead to Esquire joining the world of burlesque dancing. Esquire is just one of the performers profiled in the documentary Burlesque: Heart of the Glitter Tribe, coming to theaters this Friday (March 3), followed by an iTunes and VOD release on March 7.

World Film Geek took the opportunity to speak with Esquire on behalf of this upcoming release.

First of all, thank you Isaiah for taking the time to talk about doing burlesque and the documentary.
Well, thank you for being interested in it.

No problem. So, from watching the documentary, you were a shy and awkward teenager and you have become someone with confidence and I wanted to applaud you on that.
Thank you.

How did you get into dancing and what inspired you to get into burlesque?
Well, I was always into music and dancing. It was fun at first, but then I started to take it more seriously. In middle school, I was in the school dances and I would dance in the first ten minutes. And, I got to see how excited the people were when they saw me dancing and I felt like I was being accepted. I realized they loved it when I was dancing. Then I joined my high school dance team at fifteen and I was doing different styles of dancing, like ballroom, jazz, many different things.

I had just turned twenty-one when I met someone and they learned I was a dancer. And they were creating an all-male burlesque troupe. They asked if I wanted to be a part of it so I joined and we started doing rehearsals and performed mainly for the gay bar scene, which was an homage not just to dance, but All About Jazz, and it would lead me to being asked to join another troupe so I went to Portland and that’s how it all began.

What do you enjoy about going on the road when it comes to performing?
I love getting to know the locals and performing for the first time for them. I really love to perform for new audiences. It brings a lot of motivation because people aren’t just going to like you because of who you are, but it’s what you bring to the stage. That’s all they have to judge you by, and so I like to perform for these new audiences so they can classify you based on your performance. What will they say about me? Then of course off stage with the Glitter family, we enjoy the laughs and giggles and just being there for each other.

Exactly. That’s the impression I got watching the documentary. It seems like everyone has gotten along without showing any conflict. Would you say the Glitter Tribe is truly like a family?
Very much so. Especially because if someone comes in with bad intentions or someone is difficult to interact with, we, as a community, will get together and basically kick them out. This is really special for us and we’ve had that happen before. It doesn’t matter if you are a professional or not, you know, you have to get along with everyone in the troupe. We are a very special troupe and we give so much love to everyone and we don’t want anything or anyone bad.

Well, I have to admit this. I had a generalization of burlesque. However, after seeing the film, it opened my mind up more and because of it, I have a newfound respect for burlesque. Is this what you hope to achieve when people see this documentary?
Very much so, to get rid of the stigma. A lot of people see this more as a small job if anything. I’m hoping that people will check out performances in their community and to see more than one because every producer does something different and they can go see the performances not just to see but to experience it because you don’t know. You can end up going to the wrong show (laughs).

But the reason to go to these shows is to celebrate women and their freedom and experience every facet, show that they are intelligent, strong, powerful, and having all those things. So I hope people really get a chance to experience this. 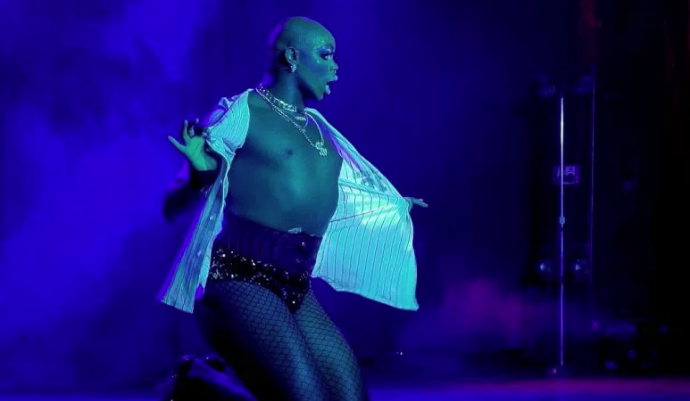 Isaiah Esquire performs in Portland as seen in Burlesque: Heart of the Glitter Tribe

I notice there wasn’t much about your off-stage life, so what do you enjoy doing when you are not performing?
I am a truly boring person (laughs). I’m just fine with a good movie and listening to a lot of music. A lot, a lot, a lot, a lot of music. I also enjoy hanging out with my husband who is also a fantastic entertainer. But we just like to sit around, talk about our feelings. We’re definitely kind of hippie-ish. So yeah, it’s totally different than what I do on the stage. I also teach kids so I spend a lot of time mentoring kids so it’s pretty chill.

For those who are interested, are you performing currently or performing in the near future?
I am planning to stop anytime soon. I am in San Francisco right now. We just got doing a “Fire and Fashion” show where I was one of the models for that. We did a couple of burlesque shows, as a matter of fact, I’m doing one tonight. Then, we will be heading back to Portland and keep on doing our thing. We have two major shows coming up. We will be in St. Louis in April and New York in June. We’re just gonna keep on going.

So the documentary, Burlesque: Heart of the Glitter Tribe, will be released in select theaters on March 3, followed by an iTunes and VOD release on March 7. I think anyone who has a generalization of what burlesque is needs to see this film. It opened my mind and I’m hoping it will open others’.
I really appreciate that and I do want to say I hope people will get to see this film and enjoy what everyone brings on the stage. I am really excited to be a part of this and there is another film I would recommend, The League of Exotic Dancers. If you’re interested in finding out more. I just watched this movie for the first time last night with some of the legends of burlesque.

It was so cool listening to the stories of these people who were doing this from the 50’s, the 60’s, and the 70’s. It was so powerful to be in the same room as these women and to be able to ask questions. It energized me more to be proud of being a part of the burlesque community.

It was a pleasure talking to you Isaiah and I definitely will have to check that film out someday.
Thank you, it was great talking about these experiences.

A special Thank You goes out to Katrina Wan PR and Isaiah Esquire for making this interview possible.