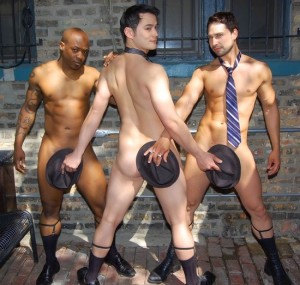 If these are the boys next door, you must live in the nakedest neighborhood ever!  The Stage Door Johnnies is the world’s only all-male burlesque group of its kind.  Based in Chicago, performers Ray Gunn, Jett Adore, and Bazuka Joe give the audience a rare glimpse at a masculine twist on the historic art of striptease.

The Ray, Bazuka, and Jett have individually and collectively earned numerous local and world titles including “Best Group” 2011, “King of Burlesque 2013” (Ray Gunn), “Most Innovative” 2011 (Jett Adore), “Best Duet” 2012 (Jett Adore & Frenchie Kiss), “Artists of the Year 2010” by the Burlesque Innovation Guild; and named in the Top 10 performers in the world by 21st Century Burlesque Magazine two years in a row.

Unique and theatrical, the ‘Johnnies’ re-imagine the classic conventions of Bettie Page and Gypsy Rose Lee and create a genuine male counterpart with a strong base in dance, theater, and acrobatics.

The 2013 King of Burlesque!  He’s the rough and tumble Johnny… and like your morning cup of coffee, he’s strong, black, and keeps you going all day long!  Ray, has headlined at burlesque festivals and shows across the U.S., Canada, Australia, and New Zealand with his smoldering, sexy, and frequently avant garde solo acts.  Trained in contemporary dance, acrobatics, capoeira, and pole dancing, Ray creates imaginative works of strip-tease art that show off his athletic ability and inspired choreography. Ray served on the creative team of ‘Beggar’s Carnivale’ in St. Louis and recently was a featured presenter at Burlycon in Seattle. He is quickly becoming known for his large menu of insightful burlesque and dance workshops.

He’s “The No-Pantser Romancer”…”The Diamond Stud”…”The Prince  of Burlesque”…”Chicago’s Vegas Showboy”… The Las Vegas Burlesque Hall of Fame named him the world’s “Most Innovative 2011”, and along with “The Temptress of Twirl”, Ms. Frenchie Kiss, Jett is half of the 2012 Burlesque Hall of Fame’s “World’s Best Duo”. “Jett’s innovative, artistic, silly, sexy, scandalous, sophisticated, and elegant performances are male striptease at its finest.” Born and raised on the Isle of Romantica, he is the internationally beloved icon of glamour, passion, and lusty elegance. Jett is known for hugely grand, epic and elaborately theatrical performances and has headlined in some of the largest burlesque shows and festivals all over the world in over 50 major cities, most recently throughout Australia, New Zealand, Canada, and the US.

He’s the sweet and charming Johnny – also known as the “Asian Invasion” of burlesque… and if you think you like his crouching tiger, just wait until you see his hidden dragon!  Bazuka has headlined as a soloist and with the Johnnies throughout the U.S., Canada, Australia, New Zealand, and soon Europe and Japan.  Trained in contemporary dance, theater, and vault staff, he creates nostalgic, witty, and lively acts that are immediately accessible to every audience.  With a retro-masculine, ‘boy-next-door’ persona, Bazuka takes everyday fantasy and childhood memories as inspiration for his repertoire.  Bazuka Joe is also a seasoned teacher and instructor with more than ten years of experience as a professional choreographer and teacher.