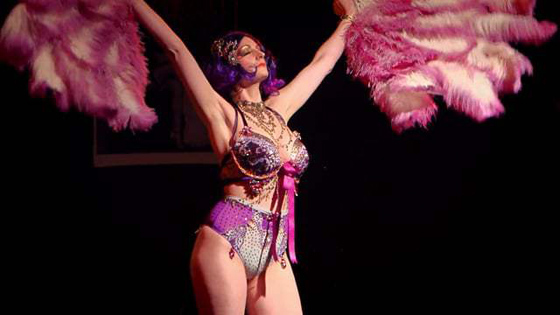 “You like naked ladies huh? “  So I was asked by Hiroko Politz, a good friend of mine and a fellow SGI member and Buddhist.   I was telling Hiroko about my recreational time at Paradise Lakes and Lake Como, two of the many nudist resorts north of the Tampa, Florida area.   This was in the 1990s and yes, one of the reasons I moved to Florida was to visit these nudist resorts.  Because, to be truthful, yes I do like naked ladies.  Ladies in general  are my favorite people, undressed even more so.

Raised in a church going family I had a Mother was insisted the human body was never to be seen.  Accordingly she burned a good many magazines featuring naked ladies.  Not just mine but my three older brothers before me.  Likely a good many of those magazines might be worth money now.

Being a typical American male, naturally this just made me want to see ladies naked all the more.  Nudist resort women were always my favorite just because of circumstance; nudists are people who choose to be naked.  For health, recreation, relaxation, what have you.  They are not paid to get undressed, they are not talked into it, they do not have their own agenda such as a Playboy Playmate might have to advance their own career.

After nudist resort women I found I had a fascination with Burlesque performers, strippers (ecdysiasts is the more fancy term) who undressed to music in front of a room full of drunks.  Classic strippers back in the day had their own routines, to quote from Gypsy, the musical based on the life of Gypsy Rose Lee, one of the most famous and popular of old time strippers “You gotta have a gimmick.”   Lili St.
Cyr, Blaze Starr, Jenny Lee and Virginia Belle, and many others, had their own style, props and costumes and made up their own dance routines in order to fleece the “suckers” out of their money.

Not long ago I reviewed a documentary on the golden age of burlesque Behind the Burly Que.  Technically that kind of burlesque show has disappeared.  Exotic dancers now, who pole dance and collect huge tips from the drunks who congregate in topless bars don’t really put on a show.  Not like the old days of classic burlesque.

Which brings me to a wonderful new documentary BURLESQUE: HEART OF THE GLITTER TRIBE.  Apparently Burlesque is still alive and well, in the Portland, Oregon area anyway.  But it is somewhat different from the old days.  The Glitter Tribe is a troupe of dancers, women and men, who put on full blown shows in the Pacific Northwest.   We meet several of them here, we are given their stage names, there is not one “real name” provided.

First up is Zora Von Panonine who apparently lives with her Mother, makes her own costumes (they all seem to make their own costumes and props) and tells us that she spends so much time on costumes, rehearsing and doing burlesque that she has virtually no time for anything else.  She painstakingly sews, glues rhinestones and attaches feathers to her various costumes.

There are also males dancers, most prominent Isaiah Esquire, who admits to having been severely abused as a child and always being a misfit in school.  In fact if there is one theme running through all the on camera interviews it is the feelings among all the dancers of never having been accepted anywhere, until they found burlesque.

Isaiah and all the other male dancers are quite proudly gay, and gender bending seems to be a natural part of these modern day burlesque shows.  The audience appears to be both male and female, straight and gay.  Which is not really much different from classic burlesque.  Even back in the straight laced 1940s and 50s burlesque shows featured female impersonators.

The male dancers admit, paraphrasing Monty Python, a female nude is sexy, a male nude is comedic.  So saying one of the male dancers during his routine reveals a bird mask in his groin area. Other male routines are equally funny.

A major difference from old time burlesque, there are no baggy pants comics in between dancers.  In modern burlesque, at least for the Glitter Tribe, the dancers ARE the comics.  Many of the routines are meant to be funny, and they are. 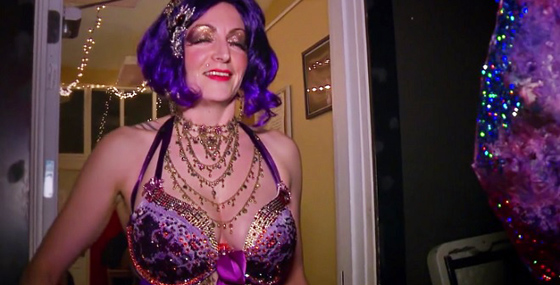 Which brings me to the breakout star of Glitter Tribe, a feisty young lady who calls herself Babs Jamboree.  She works as a tree trimmer during the day (all the dancers have day jobs, every one of them admits they do not make enough money to live on dancing, what money they do make goes to costumes, make up and props) and says she only wears make up while dancing.  I don’t know Babs’ real name but she deserves to become a star, not just in burlesque, this young lady needs to be cast in a Hollywood movie or tv show.

She tells us about her creative process whereby she came up with a burrito costume, because she likes to eat burritos.  And, trust me on this, it looks as ridiculous as it sounds.  In fact food is a major theme for Babs’ costumes and routines.  Food and being ridiculous.  Her burrito strip really has to be seen to be believed.

Babs also came up with a “reverse mermaid” costume, fish on top, and woman on the bottom.  And what happens to fish?  They become fish sticks of course!  Complete with sizzling grease sound effects and a huge paper bag to carry dinner home in.   Babs has her own website and Facebook page, I highly recommend looking her up on line.

I am quite sincere now, Babs is so energetic, so funny, so wise and intelligent, so charismatic I started hoping the entire documentary would be about her alone.  Every time she is on camera she owns the whole project.  I would consider a trip to the Portland, Oregon area just to see her perform…no kidding.

Angelique Devil is another star dancer, her dance moves are some of the best I have ever seen and the documentary spends a lot of time with her at her cabin in the woods while she tells pretty much the same story as the other dancers.  Never fit in anywhere, hard to keep a relationship going, not in it for the money but for the satisfaction of “putting on a good show!”

Another stand out performer is Ivizia Dakini who dances with fire.  She admits she is not in control of the fire, she works with it.    She admits to having been burned a few times, but not “too much.” Ivizia also has a “Jesus puppet” which is just what you would think, a ventriloquists figure made to look like the accepted image of Jesus.  She is not a ventriloquist, she has simulated sex with the puppet…really.

One of the charms of Glitter Tribe is the film makers capture the excitement of “putting on a show.”  I have some experience in Community Theater.  I played  Frankenstein’s Monster in House of Frankenstein and a drag queen in Return of the Pink Panther (and I got to sing and dance in that so I know a bit about “putting on a show.”) 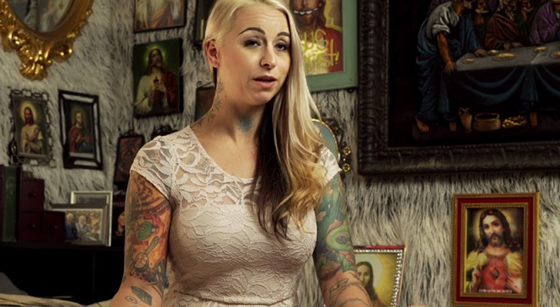 The Glitter Tribes’ shows look as they were meant to be, wildly entertaining on a very low budget.  Impressive lighting effects, good choice of music, a serious amount of rehearsal time, especially the choreography, and a serious commitment from all the performers, and put forth on tiny little stages, complete with homemade props and costumes makes for a hell of a show.

The Glitter Tribe is actually something more than old time burlesque for a modern audience, it is community theater, cabaret, standup comedy, performance art and karaoke all rolled into one.

And not all the routines are for comedy.  When some of the dancers get serious it is quite impressive.  Especially Zora, Angelique Devil and Ivizia Dakini.  When these ladies are on top of their game and the lighting and music are just right, it is magic.

This is one of those documentaries I was sorry to see come to an end.  When this is released on dvd or blu ray I sincerely hope there are a great many additional interview moments, especially Babs.   I can’t recommend Glitter Tribe enough, you have to see this.

So yes, to answer Hiroko’s question, I do like naked ladies, a lot, especially when they are this talented and committed to an art form that could have died out years ago.  Oddly enough Hiroko, a very attractive Japanese lady, was a pole dancer for a while at a St. Petersburg club called Mermaids, never saw her act though, damn it!   Now she drives a long haul truck with her husband.   Maybe everybody, female and male, straight and gay should give burlesque performing a try!  I’m afraid I’d clear the room if I tried it now! 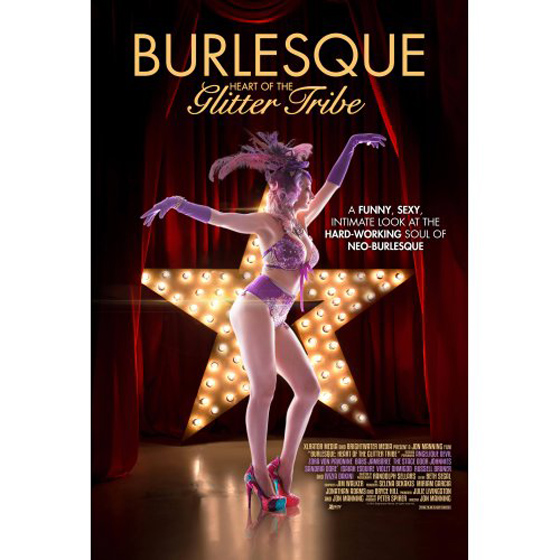